Sloans at the Garlic Festival

A day at the Garlic Festival

Posted by Steve Sloan at 8:37 PM No comments:

In the wee hours of this morning Sheree and Richard returned to Vermont. We had a great visit with them, and their daughter Jordan, who is doing an internship out here. They are very nice people and we really enjoyed having them stay with us.

Last Tuesday's whine and dine bicycle ride and jug party are here. That was one great Tuesday! The weather was perfect as was the evening. We had three rides and a hike and a long party. I led the mellow ride up Sanborn.

I brought a bottle of jug wine from Preston (that Amy Marsh turned me on to.) Here is an article in the SF Chronicle about the jug wine.

Today we had our Saturday Edition Whine and Dine Ride. This was a lot of fun. About five of us had a pancake breakfast at our house then rode 42 miles up Croy and then, on the way back, we had a lunch at the Gourmet Mexican Deli at Cottle and Santa Teresa where three more cyclists joined us. It was a lot of fun! Later this evening we went to Dave and Dorothy's for a party.

Sheree, Richard and their daughter Jordan are out visiting from Vermont. Sheree and Susie met as students at the University of Vermont in the 70's. They have remained friends since. In 1981 the two of them took a half year road trip across the US. San Francisco was one of the highlights of that trip. Yesterday we all went there together. We had a great time.

Posted by Steve Sloan at 9:28 AM No comments:

[Click here to see all my photos from this event]

This was the 2008 Whine and Dine ride at the Russian River Rally on July 19, 2008. Last weekend's Russian River Rally bicycle ride was great. Special thanks to David Adler and Sandy Lorber for driving SAG and doing such a fine job taking care of us on the ride. Thanks to everybody who pitched in food and money for the grub. The bread from Freestone and the cheese from Wisconson were both yummy (not to mention the wine!) Nancy, Pat and Mylo put on a great event and many others pitched in to make it possible. Our ride was a blast, the weather perfect and both wineries said we are welcome to return next year.

Sorry, no captions. Hope you enjoy the photos!

Posted by Steve Sloan at 8:56 AM No comments:

I am the son of an engineer. Thirty-one years ago yesterday my father died and I still miss him so much. This is a picture I took of him at work. Everything about him was so unbelievably bigger than life. I dream about him very often. To me, he was steel.

On the way to the bike rally 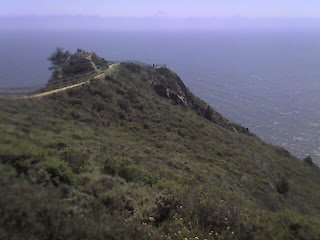 I am at muir beach overlook.
Posted by Steve Sloan at 2:44 PM No comments:

Fourteen years ago today Susie and I married

On this day in 1994 we were married at La Foret in San Jose. Oldest son, Steve Jr., was the best man. My three sons were the groom's party. It was a wonderful wedding. Susie and I have many wonderful memories. She is the best thing that has ever happend to me. Now all the kids have moved out and we have six grandkids. Susie is my best friend. Life is good, very good.

Here are more photos from some recent whine and dine bicycle rides:

Tuesday, July 8, 2008
This was a fun ride on a very hot and smoky day. Kathy and Darryl Buck and I did the mellow ride up Hicks.
Friday, July 11, 2008
This was a Friday Special Edition ride. We met in the parking lot at Almaden Expressway and Camden. Cathrine, Chris, Terry and I rode up and over hicks from the New Almaden side. Catherine and I both have Rivendells that are almost the same colors, so we posed with those. After the ride we went out for beer and burritos with Nancy and Sue.
Sunday, July 13, 2008
Another special edition ride. Dave, Dorothy and I went down and rode Mt. Eden/Pierce. It was a great day! After the ride we had lunch at Sweet Peas in Los Gatos. Dorothy had frozen yogurt.

This was a great ride, led by Peggggy, we went up Reynolds then back via Hicks. On the way back Catherine got her first flat. Laurel showed Catherine how to change the flat. She said, "every woman should know how to change a flat tire." I just documented the event. When it comes to teaching changing flats, Laurel is a great teacher. The academy should recruit her!

Posted by Steve Sloan at 5:54 PM No comments:

Bicycle club rides are great (and I even love riding on my own) but what I especially love is just getting together with friends and going for a bicycle ride. Here are some photos from some recent fun friend rides:

This morning I got a call from cousin Debbie in Boise. Debbie is the oldest daughter of my cousin Dolores. Terry (Dolores's youngest daughter Susan's husband) died yesterday of complications following a fall he had from a ladder last week.

According to Debbie, Terry was hurt badly in the fall. He broke many bones but they did not think his injuries were life threatening. But, he developed pneumonia in the hospital. Yesterday his blood pressure started dropping. His heart rate elevated, he suffered a heart attack and died. I also talked to Susan, of course she is devastated.

I visited them lasy year, in June of 2007, and stayed with Dolores. We all went out to dinner. I sat next to Terry and we had a long conversation. He was a great guy.

Dolores's husband Ben died on Feb. 11, 2007. They have a very close family and are all mourning Terry's death.

Sadly this is the second anniversary of the death of our friend Grete. She was like a mother hen, she took care of everybody else but in the end she had issues she could not get past and she took her own life.

I will always remember Grete at her best. She was a very nice person who always had a smile and a kind word for those around her. She was a gem. We miss her.
Posted by Steve Sloan at 4:17 PM No comments:

The summer of heat and smoke

"This is a summer without precedent," that is what I heard the radio announcer say the other day. I have never seen the sky so brown and the air so bad. This week we have had a string of spare the air days. Last Tuesday I went on a bike ride. It was our weekly whine and dine ride. It was hot but the ride was fun. I thought it was fine to ride until I woke up Wednesday morning coughing like a smoker. I have not ridden my bike since. I've never seen anything like this.

Patterson in the Times

Patterson, the tiny central valley town my older sons grew up in made the New York Times today.

Posted by Steve Sloan at 6:10 AM No comments:

What a difference a week makes

A week ago it was so chilly that some of the bicycle riders were bundled up after the July first Tuesday Whine and Dine ride. This week we're facing record breaking heat. Some of the other ACTC rides scheduled for Tuesday have already been canceled due to heat. We plan to hold this ride as scheduled on July 8, 2008.

Susie is very busy these days

My wife Sue is a lead technical writer and she has been quite busy. Since companies have moved from printed to on-line documentation delivery, documentation is no longer based on print based production cycles. Documentation is constantly being reviewed and revised and so writing organizations are hard pressed to keep up. Deadlines are constant.

Posted by Steve Sloan at 3:00 PM No comments:

The return of beautiful light

The wind has blown the smoke away. The sky is blue and the sun is normal again. Life is good.

Posted by Steve Sloan at 7:06 PM No comments: