Posted by Steve Sloan at 4:37 PM No comments:

What is the thought process here?

Some people seem too stupid to me to be parents
I saw this photo of a person pushing a stroller in front of a moving train on one of the railfan forums. Of course it immediately made me think of Katrina Hatton, the young babysitter who failed to prevent a 2-year-old boy in her care from being hit by a train in South San Jose in November 2005. In the picture above, according to the photographer, the train was not moving fast and the telephoto lens did shorten the perspective. But, a wheel could have gotten stuck in the tracks or she could have tripped. It is hard to imagine the consequences. 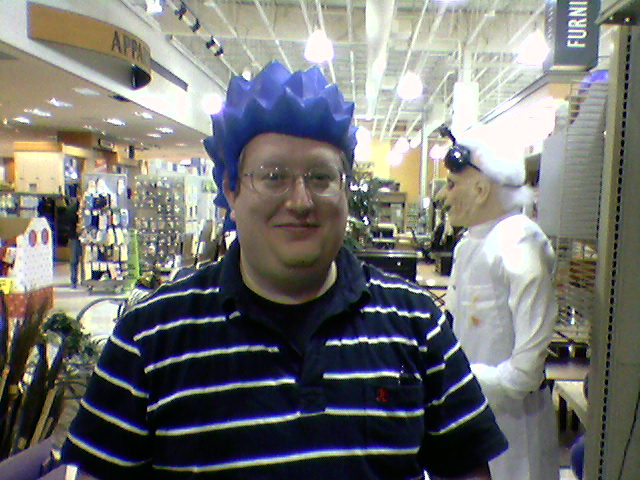 I had a nice long talk with eldest son Steve last night
On the tenth of this month Steve turned 30. We had a great long talk. He got a pressure cooker for his birthday and has taken up canning. He was in the middle of canning peaches when we talked. He likes working at Boeing and is a great dad. His family seems to keep him hopping. He and his wife Luci have a great blog here.

There and back again

I am home from LA
It was a short trip, less than 36 hours total. Some people make trips like this all the time and for them it is routine. For me it was a bit disorienting. I do not like flying in airliners. It is not the flying that bothers me, it is the security. When you fly you agree to submit to it. I do, but I resent it. I feel as though I am a prisoner in some kind of police state. That is the bargain we make in order to fly. Given my druthers, I rather drive if I can. But, this trip I couldn't.

Posted by Steve Sloan at 9:34 PM No comments:

I am near LA

I am at a meeting in Manhattan Beach, near LA. It is warm here, very warm for almost November. The Santa Ana winds have been blowing off the desert bringing both northern and southern California amazing clear and warm weather. That same amazing warm weather is giving added life to the fire season.

I started a new novel today. It is Snow Crash, by Neal Stephensen. This book was the inspiration to a very popular virtual world called Second Life. Snow Crash is in the genre "cyberpunk." Snow Crash happens in a future world where American society is crumbling. The way some lucky folks in Snow Crash escape the spreading societal decay is through a virtual world called "the Metaverse." It is the core idea of this Metaverse that is at the heart and the inspiration of Second Life.

So, I am going to the source code, the Zen of Second Life, by exploring the book that inspired it. That is what I am doing in the middle of autumn in a hotel near LA, as the Santa Ana winds blow outside.

Today I went to San Francisco

Today I went to San Francisco State University
It was a rare clear and warm day in San Francisco. I took photos of University employees who are union members for a project we are working on. On the way home I went south through Daly City on Skyline and stopped where I found a spectacular view of the ocean.

Posted by Steve Sloan at 5:34 PM No comments:

This is what is happening in my class

Tuesday's class is not to be missed!

This is a big one folks! Prepare to have your mind bent, prepare for a journey into a new Metaverse! Jeremy Kemp is going to be presenting on Second Life and it is planned that he will be joined by Aaron Uhrmacher. Aaron Uhrmacher is senior account executive at Text 100 the first PR agency to establish a presence in Second Life.
Posted by Steve Sloan at 10:45 PM No comments:

Here is to better days!

A better day than yesterday!
What a weird unplanned weekend. It started Saturday with Madison's birthday. I went for a bike ride later Saturday. Sue and I went to dinner that night. I went for another ride on Sunday and hooked up with some friends in our bike club. When I came home from the ride Sue was working in the yard. I showered, then she showered. My shower was fine, hers ended very badly. She is doing much better this evening. She is still sore, but better. The glass is cleaned up. The bathroom is back together (no more shower doors!) Life goes on. Life is like that, I guess.

Party for Madison on Saturday

Madison's two year party was Saturday
Saturday we celebrated Madison's birthday with a very nice party at Jeff and Nicole's. Madison got a lot of fun toys and was especially excited by the Brio train table that  they got her. Madison loves trains and Elmo toys and she got a lot of  cool stuff. She really had a great time. It was cute.

Susie update
Sue is doing well considering the number of lacerations she had from the broken glass. She is bandaged up. The broken glass is picked up and I am working on fixing the bathroom. I guess that bathroom remodel is going to go higher on our to do list.

A glass shower door fell on Sue as she was exiting the shower this afternoon. Suddenly she was standing in a tub of broken glass. I heard it fall and her calling for help. I came in and threw down towels so she could escape. She was cut on her hands and feet and needed to go to the hospital for stitches. She is in bandages. It's a real mess.

Podcast: Students talk about their podcasts

Posted by Steve Sloan at 8:52 PM No comments: 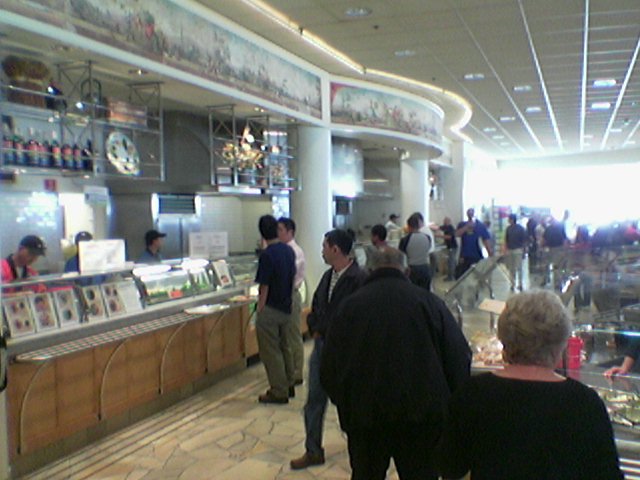 Camera Phone Post: Lunch at Mac's Cafe
We had a great lunch. It was a lot of fun. I always enjoy having an opportunity to eat here.

Posted by Steve Sloan at 1:01 PM No comments:

I am in training this week

I am in training at Apple
My training continues through the end of the week. This training is on Mac OS X 10.4 Tiger. It is part of the Apple certification track. I applied for, and was funded for, this training through a lottery grant. In my opinion we should be trained on all the software we support. We should not have to apply for training and hope we get funded for it through a lottery grant. As it is now, we staff members still have to provide technical support to faculty and students whether we are funded and are trained or not. I think the cost of not training our support staff is higher than the cost of training them. It is my opinion that trained employees are more productive and more likely to do the job right than employees who are not trained. So, training is good. Some folks say we can't afford training. I say we can't afford the mistakes being untrained leads to.

Posted by Steve Sloan at 7:49 AM No comments:

I am at Apple 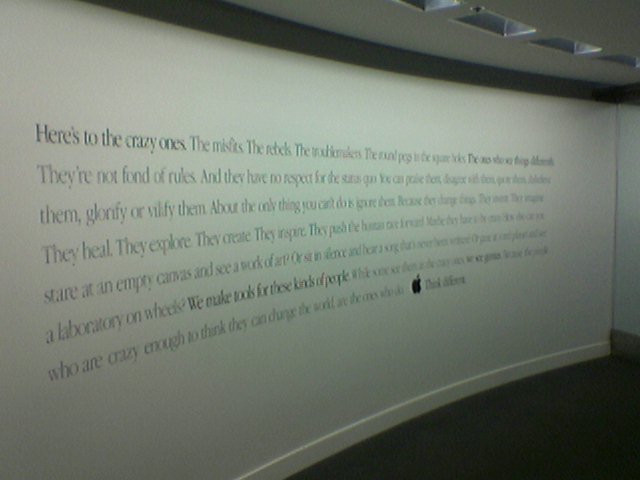 Camera Phone Post: I am at Apple today
This is the think different script. It is on the entry to the training center.

Podcast: My JACC sesssion on podcasting

My Podcast Session at JACC
This is the session I did at the Journalism Association of Community Colleges Northern California Conference at SJSU on October 14. The topic is Journalism is a Conversation, Podcasting and Journalism. In the audience are students from junior colleges and from SJSU.

Today is JACC
I am at the Journalism Association of Community Colleges Norcal Convention at SJSU. Right now I am in the Music Building listening to San Francisco Chronicle reporter Lance Williams deliver the keynote. He is talking about the Balco Drug Use coverup story and why we need a Federal Shield law for reporters. The book, Game of Shadows, co-written by Williams and  Mark Fainanu-Wada has attracted worldwide attention, and an 18-month prison sentence for the writers for refusing to name confidential sources. I met my first wife at a JACC conference in 1975. We were from two different colleges.

Posted by Steve Sloan at 9:19 AM No comments:

I went to Hayward

Yesterday I went to CSU Ebay
I am working on a project for the union that involves going to various campuses and photographing people and events there. Yesterday I went to Hayward. Tomorrow I am going to Sacramento. The last time I was at the Hayward campus was when my sister graduated from college there. I think that was in the late 1960's.

Last night Kenneth and I went to the train club and ran trains. That was also fun.

Posted by Steve Sloan at 1:11 PM No comments: 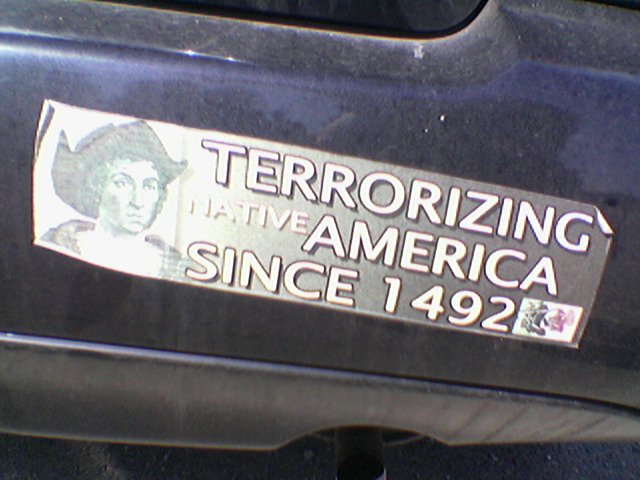 Camera Phone Post: Bumper Sticker at CSU Ebay
I saw this on a car. Columbus day was Monday of this week.

Posted by Steve Sloan at 3:21 PM No comments:

Steve turned Thirty Today!
It is hard to believe that it was thirty years ago today that this special guy came into the world.

What a fun Saturday party!
After the flight to Half Moon bay on Saturday to get the fish, we had a fantastic party at Dave's house. What a fun way to celebrate this whine and dine cycling season. A great time was had by all. We partied late into the night.

After a casual lunch Steve Sloan and Professor Steve Greene discuss "new journalism"
Included in this discussion is the ethics of anonymous blogging as it relates to journalism, objectivity verses transparency and how new journalism may in fact be very much like very old journalism from 100 years ago.

Heck of a place to park

Posted by Steve Sloan at 4:06 PM No comments:

A flight for a fish

This morning I flew with Dave, his girlfriend Dorothy and her son Jeff in Dave's Cessna. It was a fun flight, it was clear and very pretty in Half Moon Bay. We came back with half a salmon for this evening's Whine and Dine party. What fun!

Posted by Steve Sloan at 2:50 PM No comments:

This is my first post from the Mac Pro
A couple of days ago my new computer came in. This is the fastest computer I have ever used. It has the equivalent of four Xeon processors. This puppy totally rocks. I am in absolute geek heaven.

Posted by Steve Sloan at 6:14 PM No comments:

Posted by Steve Sloan at 9:03 PM No comments:

Here is the birthday girl 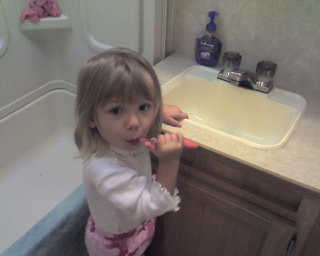 Camera Phone Post: The birthday girl brushing her teeth.
Jeff sent this photo of Madison. Today she is two! They are on a two week camping trip. This is taken in their trailer.

Camera Phone Post: Student Film Makers Race Deadline
Today was the deadline for Campus Movie Fest. This was very cool with two teams from our Journalism 163 class and one involving students from the Help Desk making films. I think this was a wonderful project for our university to get involved in and it has been a lot of fun to watch! 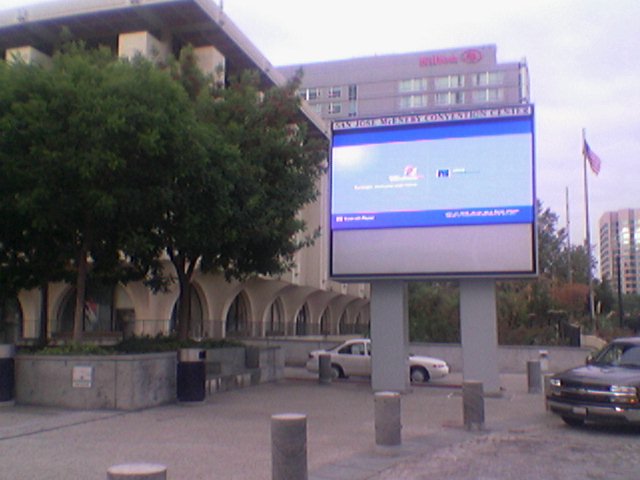 Camera Phone Post: Time to log on to a new week
I saw this on a billboard while riding my bike to work. It seemed appropriate for a Monday morning. Even more so, the user name was "Steve".

Posted by Steve Sloan at 9:07 AM No comments: