It's insane busy at SJSU

Yesterday I worked 11 hours straight. It is crazy busy at the help desk. It is RUSH in more ways than one. Tomorrow is my first class.

Posted by Steve Sloan at 1:17 PM No comments:

Whine and Dine Rides and Hike

Susie and the hikers

Recently Susie has joined a group of hikers who are doing the regular Tuesday night whine and dine rides. It has been great having her be there and be part of the fun!

Posted by Steve Sloan at 9:15 PM No comments:

John and Rose got married yesterday

Yesterday we went to John and Rosa's wedding. I photographed it as our wedding gift to them. It was a lovely wedding and a fun party after. Rosa was a lovely bride and we had a great time. What fun that was!

[More Photos of the Sloan Cats]

To us, our cats are more than just cats, they are loving companions. They keep us company, amuse us and sometimes worry us. Sue and I are quiet people who seldom have a television or a radio on, except to watch a movie or a mystery.

We like to read, or watch a movie, often with one or more of our little cat friends curled up in our laps. They are purrfect for us. We have had Tupper from the very beginning of our marriage. They are all good cats with their own unique personalities. I guess we are just crazy cat people.

Or, should I say "Joyce", last Sunday we went to Byington Winery in the Santa Cruz Mountains to a great party for these fine ladies organized by Patty. It was a lot of fun!

Posted by Steve Sloan at 8:02 AM No comments: 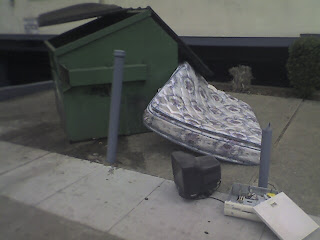 Yesterday's technology, today's trash.
Posted by Steve Sloan at 9:37 AM No comments:

I hope you enjoy these photos from some our recent Whine and Dine bike rides. Just click on the hyper-linked dates to see the photo sets:

Posted by Steve Sloan at 5:22 PM No comments:

Last week Steve, his wife Luci and their kids Cazden and Solomon came to visit. It was a good visit and really enjoyed seeing them and spending time with them.

They arrived late on Saturday August 9. On Sunday the tenth we had a family barbecue. On Monday we went to the Children's Discovery Museum, where we met my niece Sophie. I had to work on Tuesday. On Wednesday we went to San Francisco. I took the train up with grandson Cazden. It was his first train ride. He got to go in the engineer cab of the train. In San Francisco we went on a cable car and then met the family at Pier 39. Later we went to China Town. I had to work again on Thursday and they left Friday. I took the morning off Friday to be with them. It was hard to say good bye. With school starting next week I was unable to take more time off and Sue was busy on a deadline. I do feel bad about that!

I shot a lot of photos and developed nine rolls of Black and White over the last weekend:

Posted by Steve Sloan at 9:41 AM No comments:

Summer is ending at SJSU

This time next week school will be in session. To celebrate the end of the summer the help desk staff went to lunch on Saturday with Sue and I. We went to Silk Road, which is a nice Indian Restaurant in downtown San Jose. It was a lot of fun.

Here is the September issue of the Black and Blue Bottom, the Almaden Cycle Touring Club newsletter. These are in PDF format:

I publish this monthly newsletter for my bike club. It is due at the printer tomorrow morning. So, this is one of the things I did over the weekend.

Posted by Steve Sloan at 8:52 PM No comments:

Today is my father's birthday. His birthday is the day after Jeff's. Only one of my three sons saw my father and then only briefly. My dad died before Jeff was born. So, the only baby of mine dad saw was Steve Jr. By coincidence Steve, his wife Luci and two of their kids were staying with us this week. They left today heading north to Monroe, Washington, near Seattle.

Posted by Steve Sloan at 2:56 PM No comments:

Today is Jeff's birthday. Thirty years ago today he was born in Sacramento, CA. He was a helathy boy, the healthiest of our babies. Today Jeff is in Florida and so we are not able to celebrate with him. Jeff is the second of my sons to turn 30. Steve will be 32 in October.

Three fine men and I

My three sons, together again

Having my sons together is a rare event. The last time it happened was in December 2005. On Sunday evening we had a great time hanging out and talking and visiting. They are all fine men. On Monday Jeff flew out of town on business.

Posted by Steve Sloan at 4:50 PM No comments:

Oldest son Steve, his wife Luci and grandkids Cazden and Solomon are visiting this week. Yesterday sons Jeff and Kenneth and their families came to dinner at our house along with their families, as well as my sister, her husband and Sue's mom. It was a great get together and it was the first time in about four years that all three sons have been together again. I made a nice dinner, we had some good wine and enjoyed a pleasant evening

Posted by Steve Sloan at 9:15 AM No comments:

Our sweet sleeping kitties. They always look so peaceful when they sleep. In this photo Shadow is asleep on his brother Pixel's shoulder.

Posted by Steve Sloan at 5:31 PM No comments:

The City of San Jose

San Jose is Growing Up

Today I walked downtown to have lunch. When I did I took a film camera and shot some black and white film. It occured to me that San Jose is looking more and more like a city. I guess it is about time.

Posted by Steve Sloan at 5:25 PM No comments:

The riding season is winding down. Days are getting shorter. We had a very nice Whine and Dine ride yesterday but it was almost dark by the time it was over. It is too bad as I am really enjoying the rides and the social times.

It is inevitable. As September comes the riders change focus and start doing other things. Next year will be different. Some of the riders will not be back and there will be new riders. I have made great new friends this year but I miss many of the riders from past seasons who did not return in subsequent years. I wonder sometimes about them.

I hope they are happy and well.

Posted by Steve Sloan at 4:43 AM No comments:

A trip so close to home

Having company helps me discover my own home

The best part of having company is being able to see my own world as a new place through their own eyes. When our friends came from Vermont we took them to San Francisco. They were delighted and it was fun re-discovering this great city that is so close to where we live. They wanted to go to Alcatraz. But, we could not get tickets. Despite being so close. I have never been there, not yet anyway.